Start a Wiki
Slender's Woods is a game based on the Slender Man, a mysterious being that lurks the forest.

Unlike other Slender Man-based games, Slender's Woods actually has more of a storyline. The game centers around a man who experiences agony since his wife left him, and decides to move to a cabin that his parents owned. His stay goes well until it is interrupted by unusual disturbances and gets stalked by a mysterious creature.

The game was released October 19, 2012 by Russian developer nicknamed as ZykovEddy and features two gameplay modes.

A man suffering because his wife left him, finds his life unbearable in the city. He then decides to move to a cabin that his parents owned to find peace. It was going fine, until he starts hearing strange noises outside the cabin. He decides to go outside to check it out, only bringing his old flashlight. He then gets a bizarre static while also seeing a strange figure very briefly. Shocked and scared, he decides to go back to his house, only to find it barricaded. Trapped outside, his only choice is to roam the forest. He finds a cabin, in it is a note written by a man named Cody. It tells the strange things that happens to him and the paranoia that he has with the forest. It says that he decides to go to the tunnels to find a way out. After reading this, the man finds a key to the tunnels and decides to go. After checking the place, finds another note from Cody saying that he cannot find a way out, and he encountered a being that he described to be a tall suited man without a face and long arms. Cody then decides to go to a mansion that he believes to have a telephone. After finding a key to a mansion, he makes his way outside the caves only to encounter Slender Man.

After leaving the tunnels, he encounters the creature more as he goes around the forest. He gets to the mansion, only to find a note from Cody that there are no working phones there, and trying to climb the fences were hopeless, as Slender Man will appear. Cody then decides to go to to the sawmill to find something to kill the Slender Man. He also decides to do the same. He decides to check the basement of the mansion, finding a hammer. After some work, he opens a door that has a door that needs a key, which is in a house. He goes out to get it, running back to the sawmill to open the door. He then runs through its tunnels seeing warnings and the Slender Man himself very briefly, and when he finds the end of it, he is shocked in horror to see what he believes is the remains of Cody, large smears of blood on the ceiling. He finds a gun, and goes out to kill the Slender Man. After shooting it a couple of times, he believes he has killed it. He then leaves the forest, only to encounter multiple creatures similar to Slender Man. With his dying words, he says the following: 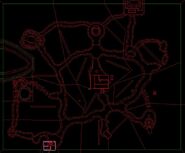 Slender's Woods map
Add a photo to this gallery
Retrieved from "https://theslenderman.fandom.com/wiki/Slender%27s_Woods?oldid=144366"
Community content is available under CC-BY-SA unless otherwise noted.