Proxy (plural: Proxies) is the term given to those who serve The Slender Man. The theory behind the name is that Proxies are entities or people who are under the influence or control of the Slender Man (or the same force that influences Slender Man), and act based on its wants and needs- hence, Proxies serve as an in-between (i.e. a proxy) for Slender Man.

It is suspected that Proxies do the actual, physical work for Slender Man, such as creating and manipulating objects, destroying and leaving evidence, creating videos and responding on Twitter (in ARGs), and influencing victims as needed.

Despite popular belief, proxies are essentially little more than slaves. They are simply mind-controlled humans, who do not gain any unnatural properties other than their behavior. Most proxies are completely unaware of their nature, as their memories are suppressed by Slender Man, and those who do find out they are proxies are often horrified to learn of the mind control that had occurred.

Very few proxies retain any of their personality while in forced servitude, as most adopt a separate personality altogether, sometimes nearly opposite of their real personality. This may be a method in which Slender Man helps prevent them from remembering their actions, or figure out what they really are. This alternate personality can range from sadistic to completely emotionless.

Many proxies seem to figuratively (or sometimes literally) worship Slender Man while under his control; whether this is as a means of keeping them obedient or a result of an inflated ego is unknown, although the former may be more likely.

Some stories report proxies who have either failed or who outlive their usefulness later being destroyed to prevent them from becoming a problem.

In somewhat rare cases, fans will report Slender Man possessing a proxy completely, taking full control of the individual to the point they become nothing more than a vessel for Slender Man's own mind.

The Blogosphere in its story eventually fleshed out a system of ranks for its proxies. While other sources traditionally only had one or two proxies, the blogosphere went through a period where runners would be hunted by large packs of proxies. This lead to criticisms claiming that the proxies took the focus away from the Slender Man itself, and that the proxy hordes made the stories too much resemble a zombie apocalypse fiction. Some blogs made efforts to retcon proxy hordes away as hallucinations.

The ranking system is as follows:

Proxies most likely got their start from early Slenderman works' usage of mental influence of Slenderman. Early creepypasta indicated that Slenderman was able to telepathically communicate or influence his victims or those he wished to do his bidding. The most common early evidence for this was the usage of telepathic communication to speak to children who he would lead outdoors and then into the forest. He also used the telepathy to control his victims without their knowing and bring them into his domain. Several stories in particular focus on the strength and usage of this power. The idea behind proxies may be derived from the idea that he could not only influence his victims, but also influence individuals to do as he wishes to get to his victims. Proxies are considered the primary or secondary antagonists of most Slenderman based ARG's.

See: Abilities of the Slender Man

Notorious Proxy from TribeTwelve; the Observer, is theorized to use their symbol in order to watch Noah, keeping a tab on his every movement. Though, it could be nothing but scare tactics.

The Operator Symbol has been seen in many Slenderman ARGs. Including, but not limited to TribeTwelve, DarkHarvest00, and even wildshadows57. It has been accepted as the primary pop culture symbol for Slender Man and Proxies.

It is important to note that characters from MarbleHornets or EverymanHYBRID are never termed as Proxies, as the two series have never adopted nor stated the term, and otherwise have no connection to the term whatsoever.

Amateur writers and film artists have claimed to be stalked by a wide variety of proxies, be proxies themselves, or house proxy identities in their subconscious mind. None of which have been properly identified. Such amateur creations include The Tan Suit Man, The Studded Man, or the Faceless Follower.

The fan-creations of amateur writers can be found on the connection wiki.

(Minimally edited to censor curses, Original blog link above, can be read uncensored on Deviantart)

In response, Kastoway also posted the following under the username "Bonejags" on the comment section of this article (Link to uncensored comment):

I cannot believe the bulls--- that I am seeing in these comments. I cannot believe that there is an actual debate over whether or not Ticci-Toby is real. I made this account to announce that no, he is not real. How do I know? Because I'm the one who made him the hell up. I'm Kastoway from deviantart, the one that's credited in the wiki for writing the story. If you don't believe me here's a link to a journal about this subject that's on my account http://kastoway.deviantart.com/journal/What-the-f----599845215

So, once again, I'm going to say it. Ticci-Toby is 100% FICTIONAL. As in he is NOT REAL. So no, to those saying that they've seen him with their own eyes, you haven't, there's nothing to see because he doesn't exist. He's not based on a real person nor an urban legend, he is a character I made up because I wanted to write a scary story for my own entertainment. I had no clue that it would get this amount of attention, and that's why handling the subject has been so rough for me.

I apologize if I sound harsh but I have no tolerance for this bulls---. The amount of people who think that he's real is absolutely obscene, and I can't bare to think that another incident similar to the Slenderman Stabbings is possible because of something I created for fun. Please do not let that happen and take this seriously. It's one thing to enjoy a horror story, it's another thing to get joy from thinking that fictional psychopaths are real and that you're able to interact with them. They're fake and quite frankly I don't care how hearing that affects you, if you're heartbroken to hear that a crazy f---ing murderer isn't real then there is something wrong with and what you need is help and a taste of reality.

(Edited minimally to censor curses. Original unedited comment link above, and will remain unedited for record).

Since then, all comments regarding worshiping Toby or trying to imply he is real have been either heavily edited or deleted entirely. Kastoway himself does not wish to speak about Ticci-Toby further.

Characters commonly mistaken for proxies who are not: 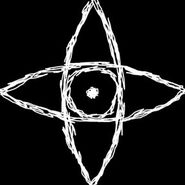 Symbol of Severance, used by The Observer, TribeTwelve's Main Proxy